T is for... The Tidal Basin, Teddy Roosevelt, and the Treasury Building 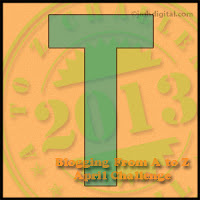 Here we are at the letter T, and it's going to be another busy day.  Let's get started!

The Tidal Basin is a reservoir very close to the Mall, and it's one of the most picturesque parts of this beautiful city.  Lined with memorials and cherry trees, a walk along the Tidal Basin is full of national landmarks and the beauty of nature.  For the bold, you can rent paddleboats and get out onto the basin itself. More of a land-lubber?  Take a walk along the water-side path, and make your way from the Lincoln memorial to the Jefferson Memorial, with a stop at the FDR memorial along the way.  Just don't forget your camera!

While you're walking, check out the Treasury Building.  Located next door to the White House, the building in and of itself is perhaps not that exciting.
However, just a few years ago it was home to a rather famous guest:

That's right, a mama duck made her nest right outside the Treasury Building, next to a rather busy sidewalk.  It turned out to be a good place, as she got Secret Service protection during her stay.  After her babies hatched, they were safely relocated to Rock Creek Park.

Finally, let's consider Teddy Roosevelt.  Not only was he our 26th President, he's one of the mascots of the Nationals.  During every game, there's a Presidential race, where the absurdly large-headed mascots tear around the field in a bid to win.  Poor Teddy doesn't have a very good record.  In fact, he's lost so many times, there's a blog that expresses sympathy for his plight.  When Teddy did finally win a race, it made the news.
So while you're catching a game, tip a little out for old Teddy.  Despite his dismal record, he's still a good sport.
Posted by Unknown at 12:01 AM