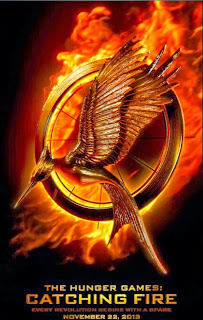 I read The Hunger Games trilogy a couple of years ago, and for the most part, I enjoyed it (as much as one can enjoy a series of books about a dystopian future in which children are forced to kill each other for the entertainment of the masses). However, in my ranking of the books, Catching Fire was the book I liked the least. It felt like a re-telling of the first book, and I didn't think that the overall story moved forward much.  It seemed like more of a placeholder book, to get us from book 1 to book 3, rather than an important chapter of the story in its own right.

Based on my impressions of the book, I wasn't quite sure what to expect from the movie.  I was pleasantly surprised.  It could be my expectations were unusually low, but I thought the movie did a great job of adapting the book.  We missed some of the smaller moments in the book that acted as breadcrumbs for the reader, but that's rather expected--the movie can't portray everything in the book, and I thought the scenes they did choose to show were done really well.  The actors have come to embody the characters for me, and they make me care about these people all over again.

Finally, the costumes were wonderful!  Katniss's dress--amazing!  I may have to see the movie again to get another look.

Overall, I quite liked this movie, and I'm looking forward to seeing how they adapt Mockingjay for the big screen.  What about you?  Have you seen Catching Fire yet?  What did you think?
Posted by Unknown at 7:00 AM

Email ThisBlogThis!Share to TwitterShare to FacebookShare to Pinterest
Labels: Books Go To The Movies, Catching Fire