Books Go To The Movies - Hansel and Gretel 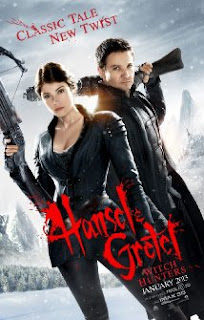 I took German in college (Sprechen sie Deutsche?  No?  That's okay, I don't either. [g]).  One of our assignments was to translate Hansel and Gretel from German into English.  I spent many hours in the library, poring over my German-to-English dictionary, trying to piece the story together as I identified words.  It gave me a new appreciation for translators, and while it was a lot of work, I did enjoy the project.

I haven't read the story in years, but nevertheless, I feel comfortable in saying that the movie is quite a departure from the original fairy tale.

Hansel and Gretel are all grown up, and they hate witches.  So much so, that they've made destroying witches their lives' work.

As the movie opens, they've come to a village to discover why the local children are going missing.  They immediately suspect witches (I guess when you're a hammer, every problem looks like a nail) and set off to find and rid the surrounding area of said creatures.  They're confronted by an evil, powerful witch who thwarts them at every turn, and their past comes back to haunt them as they strive to rescue the children.

I'm not sure what I expected going in to this movie, but I was a bit surprised at how graphic it was.  There were several scenes that were unexpectedly gruesome, and didn't seem to fit in with the overall tone of the film.

I also felt the movie was a bit predictable.  The outcome was never really in doubt, which meant that suspenseful moments weren't all that powerful.

Overall, I was disappointed, despite the fact that Jeremy Renner takes his shirt off.  I guess the best comparison is Van Helsing, another gothic, monster-y type movie that fell flat for me.

Has anyone else seen this one?  What did you think?
Posted by Unknown at 8:35 AM