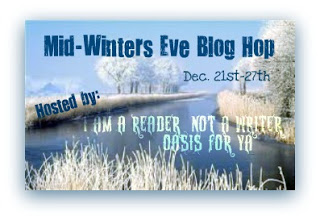 I'm pleased to participate in the Midwinter's Eve Giveaway Hop, sponsored by I Am A Reader Not A Writer and Oasis for YA.

The holidays are my favorite time of year, thanks in no small part to the widespread distribution of plaid.  Seeing plaid everywhere feeds my Scottish obsession, and I figured for this giveaway, I would share my love of the Scottish romance.

Up for grabs is a copy of Monica McCarty's latest, The Recruit.  Here's the back cover blurb: 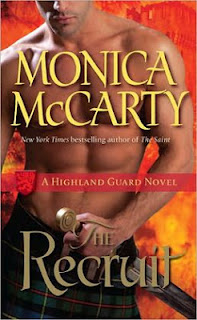 Scotland’s King Robert the Bruce is retaking his kingdom from the invading English. To win, he’ll need all the grit and courage of his elite band of warriors, the Highland Guard, men who fight without fear and love without limits.

Fiery, aggressive, and bold, Kenneth Sutherland is a true champion—skilled with any weapon and driven to win. Now Kenneth is ready for his greatest challenge: joining Robert the Bruce’s secret army to fight among the elite. Kenneth’s best chance to attain that honor is by winning the Highland Games. Focused and prepared for victory, he is caught off guard by a lovely wisp of a woman—and a stolen moment of wicked seduction. Her innocent arousal and her shameless hunger fire his blood. He will win his place in the guard—and in Mary of Mar’s bed.

The ruggedly handsome hero-in-the-making stirs a heart that should know better. Mary vows that her surrender will be sport only—no promises, no heartbreak, just one night of incredible passion. Nothing, she swears, will persuade her to give up her hard-wrought independence and put her fate in the hands of another powerful man. But with every gentle touch and heart-pounding kiss, Kenneth makes her want more. Now Mary wants his heart. But is this determined champion willing to surrender everything for love?

This is a great series, and the books can be read as stand-alones as well, in case you haven't read the others (but you really should as they're awesome).  I also have a ton of Scottish-romance goodies to include with the book, so the winner will be getting quite a collection of stuff!

The giveaway is open to US readers, and runs until December 27.  I'll announce the winner on  Friday, December 28.  Use the Rafflecopter form below to enter.

Good luck, and happy holidays!
a Rafflecopter giveaway
Posted by Unknown at 10:01 PM